Booking
For more information about booking process and our cancellation policy please check the page How to book tours online. If you found an inaccuracy or mistake in the description of the tour, or faced with site error, please let us know about it in any convenient way.
30-meter yacht with qualified crew, different lounge area's, a spacious sundeck, an open-air covered deck with dining table, an internal saloon and private rooms with toilet offer a high level of service and comfort. Enjoy our chef's Thai buffet for lunch and taste the local rum cocktail made by our bartender during sunset.

Baidee yacht welcomes you onboard for private cruises around Koh Samui, Koh Phangan or to Angthong Marine Park. Full day cruises start from Petcherat Marina (Bangrak Beach) between 08.00 and 08.30 am and will come back to the pier around 18:30 pm. Pick up times at resorts and hotels from 06.50 am through to 08.00 am. Half day charters start between 08.30 am and 14.00 pm.

Cruise on the luxurious yacht is the most unforgettable way to celebrate some outstanding event.

The Baidee is ideal for wedding ceremonies and other celebrations.

The most striking moments can be captured by professional photographing and video filming.

Bugis Phinisi Schooner is a traditional Indonesian two-masted sailing ship. It is mainly built by the Konjo tribe, a sub-ethnic group of Bugis-Makassar mostly residents at the Bulukumba regency of South Sulawesi, and still is used mostly for inter-insular transportation, cargo and fishing purposes within the Indonesian archipelago.

The Bugis together with the Mandar, both of South Sulawesi, are master shipbuilders and superb mariners. These boats have carried the Bugis far across the archipelago and many have further settled on Java, Kalimantan, Sumatra, Papua, and the Nusatenggara islands. The Bugis were not only respected as master seafarers but were also greatly feared as pirates.

The Bugis of 100 tons to 200 tons today still play a vital role in traditional transport and inter-island trade. In the 19th century, Bugis perahus (boats) were loaded with European and Chinese manufactured goods from Singapore carrying these too far away Dobo in the Aru Islands in East Nusatenggara stopping at remote ports along the route. From the Indonesian islands, they gathered birds-of-paradise feathers, sandalwood, spices, gold, and pepper to sell them at the significant profit in Singapore to Chinese and Indian merchants.

Today, the Bugis carry all sorts of cargo from timber to cement, house tiles, rice, sugar, up to motorcycles and crates of cigarettes to sell these to islanders in the archipelago.

Nowadays also, the Bugis are refitted to serve as unique traditional liveaboards for divers to pristine locations, especially in the eastern Indonesian islands. These sturdy vessels now come complete with cabins, kitchen and toilet facilities to accommodate members of diving expeditions to the Komodo park in Flores and the Raja Ampat national park near Sorong, in West Papua.

Please register or login to submit a review.

Average rating is 5 from total of 1 review
EJsam
A must do...boat trip round Koh Samui!

15 of us chartered the "Baidee" for a friends special birthday and what a great day we had. The whole day was chilled and it was about what WE wanted to do and given options, so we went round the island of Koh Samui.

Most of us were on the top deck getting some sun, however there are plenty of spaces to lay down and under cover. We were always being offered drinks and Axel was always around to make sure we were all having a great time. The lunch on board was excellent and something for everybody....you won't go hungry as in the afternoon as we are watching the sun go down, chicken satay with a delicious homemade peanut sauce was handed round....mmmm, i could have spread that peanut sauce on some toast!

We stopped off in the south to go to a beautiful small island, where you can go swimming or stay on the boat. Towels are provided so you don't have to lug these around with you.

We were all sad to get off the boat after such an amazing day together. Thanks to the crew and the owner Thom, you made our day very special. See you again soon. 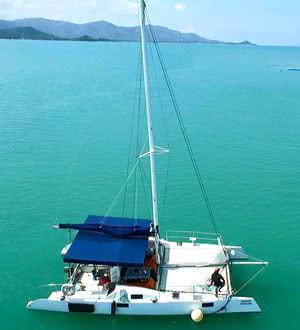 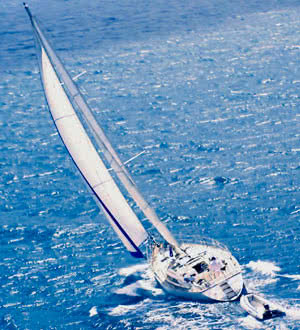 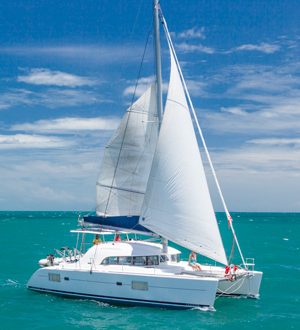 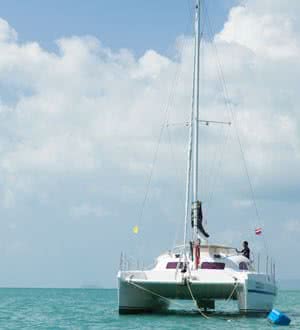